“Where is reality? Can you show it to me?”

Early this year, I wrote in “The Magic of Fiction”:

…I find that fiction makes the most sense when I view it as a dream. From this perspective, plotholes, as well as realism and plausibility in general, aren’t exactly of earth-shattering importance. It’s imaginative fiction. It’s a dream, not a documentary. Dreams are often logically inconsistent and are not infrequently downright absurd, but that doesn’t mean that they can’t be enjoyable or edifying, or even enlightening and life-changing. Why must fantasy be brought down to the level of reality? Is not the fundamental goal of fiction to convey an experience, which is something that can be appreciated with or without the element of realism?

PZ Myers does a rather fine job of illustrating my point with his critical blog post on Man of Steel:

The falling woman trope. It’s everywhere. The poor woman is plummeting to her doom at the terminal velocity of 200 km/hr, and superhero swoops upwards at even greater speed and catches her. This doesn’t work. At that speed, invulnerable super-strong arms are like blunt blades and are going to messily trisect the victim.

Slugfests. In every case, bad guy meets good guy and you know that shortly they’ll start throwing roundhouse blows at each other. This is not how people interact with each other, except when they’re very drunk and stupid. These are supposed to be super-intelligent, powerful beings, and their standard response to any challenge is to punch someone in the nose.

There has to be a witness. This is a corollary to the absence of deaths. A couple of the secondary human characters face the most traumatic event ever — one of them is stuck under a pile of rebar and concrete (don’t worry, they pry her out and she’s completely uninjured!) so they can stand around and gawp as the superclowns rampage all over their city. Titanic forces are shattering whole buildings, but they stand there getting a little dust in their faces, and that’s it. (Emphasis mine)

It’s understandable that someone so firmly grounded in the hard sciences as Professor Myers is would view fiction in this light. It’s not “right” or “wrong,” but I simply don’t think that the laws that govern the prison of the real need to encroach upon the free lands of the unreal. If the tyranny of logic is absent in the realm of the imagination by default, why must we go out of our way to voluntarily enforce it? I render unto reality the things which are reality’s, but when it comes to fantasy, I embrace the illogical–and the impossible.

As James Cameron put it, “[T]he beauty of movies is that they don’t have to be logical. They just have to have plausibility.”

I would go a step further and say that the content of movies, and fantasy in general, doesn’t even need to be plausible–just imaginable. If something can be conceived, be imagined, that is enough. For what matters is the experience. 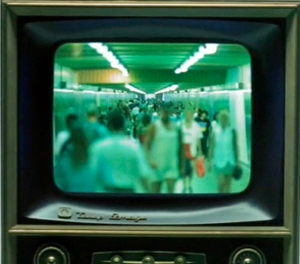 “You’ve felt it your entire life, that there’s something wrong with the world. You don’t know what it is, but it’s there, like a splinter in your mind, driving you mad.”

“[T]he real world, as understood scientifically, has magic of its own – the kind I call poetic magic: an inspiring beauty which is all the more magical because it is real and because we can understand how it works. Next to the true beauty and magic of the real world, supernatural spells and stage tricks seem cheap and tawdry by comparison. The magic of reality is neither supernatural nor a trick, but – quite simply – wonderful. Wonderful, and real. Wonderful because real.”

I agree, I think reality is wonderful–and I think reality is overrated. Shoot me. To the good professor I would say: have a lucid dream and then tell me it wasn’t wonderful. Tell me that meeting Charles Darwin in person and discussing evolution with him for two days straight was boring compared to reading The Origin of Species. Tell me that flying with invisible wings was a dull and uninspiring experience compared to flying on an airplane. Tell me that traveling to the center of the Sun was a cheap and tawdry experience compared to observing it through a filtered telescope. It’s your world we are talking about, not mine, not theirs, not ours–but yours. And it’s wonderful because it’s yours.

There are plenty of things I appreciate about reality. Reality made my standards, reality gives me contrast. If there were no reality, or at least the knowledge of reality, I’m not sure that it would be possible to appreciate fantasy.

H. L. Mencken had a point when he wrote:

“Alone among the animals, [man] is dowered with the capacity to invent imaginary worlds, and he is always making himself unhappy by trying to move into them. Thus he underrates the world in which he actually lives, and so misses most of the fun that is in it. That world, I am convinced, could be materially improved, but even as it stands it is good enough to keep any reasonable man entertained for a lifetime.”

I wish I could be like him, sometimes…sort of.

But to suggest that reality is superior to anything that we can imagine is practically Leibnizian. Reality is a one-size-fits-all world that wasn’t designed for us on even a collective level, let alone on an individual level. In my view, to be able to have dreams but not be able to realize them is not only a waste, but a perverse travesty. What makes for a richer experience, observing and studying the stars, or reaching out and touching them?

I am not content with the magic of reality. I want magic–real magic. As I’ve said before, I respect science and can appreciate the wonders of the natural world it has and continues to reveal, but I do have a longing for more. For all its beauty, the world seems too fixed, too solid, too predictable, too mechanical. I have a deep-seated longing to find a hole within the omnipresent tapestry of unalterable constants, of scientific theories and mathematical equations, a “glitch in the Matrix,” if you will.

One might ask, “Then why acknowledge reality at all? Why don’t you just ignore it and pretend that it isn’t there?” Easier said than done. As Ayn Rand pointed out, “You can avoid reality, but you cannot avoid the consequences of avoiding reality.”

To which a good materialist can only reply, as S. T. Joshi did: “To be sure, it is more ‘restrictive’ to believe that two plus two always equals four rather than that, at various times as my fancy dictates, it equals five or seven or a billion, but what is one to do?”[1] I am not unsympathetic to Chesterton’s wish to believe in fairies and imps and the supernatural in general, but alas, that does not seem to be the universe we live in.

I don’t believe that I hold a grudge against science. If the universe really is as “mathematical and regular” as it looks, science cannot be faulted for that. A person that jumps off the roof of a 100 floor building, convinced that he has wings, will very likely end up as a sorry mess of meat and bone on the ground, regardless of whether or not he acknowledged the law of gravity. Science didn’t invent the law of gravity or any other natural law; it merely discovered and codified them.

Joseph McCabe once wrote, “A nation is most gifted with poetic imagery in its adolescence, when the imagination is far more developed than the intellect.”[2] No matter where science and reason take us, may we never lose our capacity to imagine and dream!

[2] “The Truth about the Prophets” by Joseph McCabe

“For we brought nothing into this world, and it is certain we can carry nothing out.”

“Own nothing! Possess nothing! Buddha and Christ taught us this, and the Stoics and the Cynics. Greedy though we are, why can’t we seem to grasp that simple teaching? Can’t we understand that with property we destroy our soul?

Own only what you can always carry with you: know languages, know countries, know people. Let your memory be your travel bag. Use your memory! Use your memory! It is those bitter seeds alone which might sprout and grow someday.”

Though Solzhenitsyn’s advice seems at best impractical and at worst unworkable (because if one doesn’t take care of one’s own material needs, someone else will have to), his words do resonate with me, for at least two reasons. One is that I tend to value the nonmaterial over the material. I find that I desire knowledge, skills, and experiences more than I do luxuries such as fine cuisine, expensive clothes, and sports cars. The latter are merely symbols of wealth; the former is wealth, and wealth of the finest kind. Knowledge is purer than money, because the former can be shared without being divided. The love of the nonmaterial is not about being ascetic; on the contrary, it’s about being greedy, and greedy to the extreme–but for the intangibles rather than the tangibles. Furthermore, a person is not what he or she buys, but what he or she earns by living a purposeful life.

Another reason is that I’m well aware that I’m going to die someday. I have no idea when; it could be later tonight, for all I know. On the off chance that there is an eternal afterlife and death is the beginning of a new journey, I’m sure that what I store up in my head and heart will serve me better than what I store up in my home. And I like the idea of traveling lightly.